Hearing loss isn’t a new problem, and efforts to correct it go back in history farther than you would imagine. Have you ever thought about how people 200 years ago or more dealt with their inability to hear well?

In the beginning, there were primitive hearing devices made from hollowed-out animal horns and more. Thankfully, we have come a long way in hearing aids and other technology to help those that suffer from hearing loss.

Let’s look at where we’ve been and where we are now when it comes to hearing aid technology and everything surrounding it. It’s taken several inventions, ideas, and failures to get where we are, but we’ve managed to improve year after year, bringing us to where we are today. We all have much to be grateful for this Thanksgiving!

The Evolution of Hearing Aid Technology

Animal horns and ear trumpets were first used to help gather sounds, enabling the user to hear better. While the idea was a good start, it only helped bring in the sound, not make it louder. These trumpet-shaped devices and other bulky contraptions like the hearing fan and speaking tube helped support the effort as well.

Once the telephone was invented and electricity was being used in more ways, extraordinary developments were made in the hearing aid world. Thomas Edison, struggling with hearing loss himself, made a carbon transmitter for the phone. This amplified the electrical signal, increasing the decibel level to around 15 dB, which was a great beginning!

By the 1920s, vacuum tube technology increased that decibel level as far as 70 dB. These vacuum tube hearing aids started off large and were not portable at all, but soon their size was reduced and could be carried in a small wooden box along with a receiver that could be held up to the ear when needed. Still, these were bulky and not user-friendly. All types of sounds were made larger instead of just the sounds the user desired to hear.

Speed forward to 1938, when the first hearing aid you could wear was made. This was an exciting development indeed, helping the user be more hands-free. This was achieved with an earpiece and wire, a receiver being part of the contraption clipped to the user’s clothing, and a battery pack strapped to the leg. Of course, this still wasn’t completely ideal, but it felt like a giant leap forward.

In the late 1940s, a more “discreet” hearing aid that fits inside the ear was made, which combined all parts of the hearing aid, including the battery. While this was marketed as discreet, it was still bulky, and the fit was less than desirable.

Towards the early 1950s, the transistor was developed, which allowed the start and stop of the flow of a current as well as the ability to control the volume with different settings all on the hearing aid itself. In addition, these smaller hearing aids were much more discreet as they could be worn inside or behind the ear. Just a few years later, they were even embedded in the corner or temple piece of eyeglasses, becoming a very popular choice for many people.

Today, digital hearing aids can be programmed, customized, and fine-tuned for each user and their day-to-day needs. They can change to adapt to certain situations and demands that the user requires. Hearing aids can even be connected to computers, televisions, and cell phones, making even the simplest of tasks more user-friendly.

It is clear that we’ve come a long way from animal horns and ear trumpets over the years. New advanced technology ensures we will continue to move forward, making it easier for those needing hearing assistance to cope and enjoy everyday life more fully. 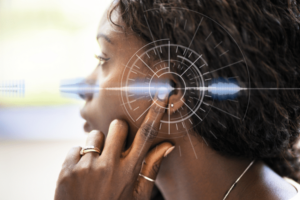 The Largest Improvements in Hearing Aids in the Last Decade

At the beginning of this holiday season, we have so much to be thankful for and appreciate. Advanced technology touches almost every part of our lives these days, and hearing aids are no different. We are so blessed to live during a time when hearing aids are so functional, easy to use, and customizable for their users. We can all be thankful we’re not carrying around an animal horn to hear better anymore!

If you need to improve your dated hearing aid situation or are ready to try hearing aids for the first time, contact our specialized hearing team at Fairfax Hearing Center to schedule an appointment and hearing test.