Is Earwax a Cause of Hearing Loss, and Is There an Easy Fix?

Everyone is different when it comes to earwax production. Some people tend to have a lot of earwax they deal with, while others hardly have any. When thinking about your ears, have you ever wondered, “is earwax a cause of hearing loss, and is there any easy fix”?

If you have been noticing that it’s not quite as easy as it usually is to hear things clearly, could it be possible that the problem is as simple as earwax buildup?

What is Earwax, and Why Do Our Bodies Produce It?

Your ears (or the glands in your ears) regularly make a waxy, oily substance called earwax. It’s combined with dead skin cells and travels through your ear canal to the very entrance where we can view it.

Earwax is meant to protect our ears from infections or getting hurt from foreign objects or even water entering them.

Why Do Some People Get Earwax Buildup?

Some people are just simply prone to producing excess earwax. These people aren’t automatically guaranteed to have wax buildup, though. Some things make it easier for earwax to become more compact. Using items to attempt cleaning your ears is a major factor when it comes to pushing earwax tighter and tighter into the ear. Q-tips or other objects can create unwanted blockage as well as things like regular use of earphones that likewise compact earwax. Older adults that wear hearing aids can also be prone to earwax blockages.

If you notice that your child has excess earwax, it’s a good idea to talk to your child’s doctor about it next time you visit. Your doctor can make it a point to check for any blockages or excess wax and educate you on the best ways to care for your child’s ears safely.

Knowing the things that can contribute to you and your family’s chances of earwax buildup and possible hearing loss can help you prevent them from happening in the first place. Using extreme care as you clean your ears is necessary for healthy, well-functioning ears and hearing.

When your body produces earwax faster than it can get rid of it, you can quickly have an impacted earwax that causes hearing loss. While it’s probably not going to cause complete hearing loss, it can be a significant contributor. Just think of the small opening into your ear which collects the sounds going on around you. Now think about blocking that narrow opening with impacted earwax, packed so tightly that not even your doctor can see past it. Then, of course, your hearing will be affected! 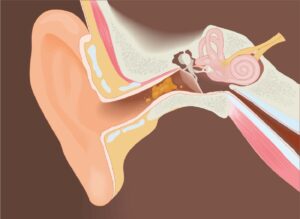 How Do You Know If You Have a Blockage?

It’s essential to know the symptoms of earwax buildup and blockage so that you can remedy the situation if needed. Remember, many of these symptoms can happen slowly and are often mistaken for other conditions. Work closely with your health care provider if you notice any of the following symptoms:

If left untreated, severe infections can occur, leading to continual hearing loss, and as listed above, fevers and more. It’s essential to see your doctor about any of the symptoms listed above. While an earwax blockage may cause them, it could also be a sign of other health issues as well. Don’t try to self-diagnose as vital indicators could be missed and dismissed that could be a key detail in your condition.

Impacted earwax and overproduction of earwax can be the result of other health disorders like:

While some conditions that affect earwax impaction are physical blockages, others are illnesses or conditions that simply cause more wax to be made by the body. If you have one of these conditions, you are at greater risk for impacted earwax and, in turn, hearing loss. Therefore, you need to pay special attention to your ears and keep them clean and unblocked. Mentioning it to your doctor so that he/she can also be of assistance can be helpful as well.

How Are Earwax Blockages Diagnosed and Treated?

Your doctor will be able to diagnose an ear blockage by looking into your ear and performing a physical exam with an otoscope. Your provider may also require a hearing test. Even if you don’t have any of the symptoms discussed earlier, you may still be diagnosed with impacted earwax.

Treatment for earwax blockages can vary depending on the patient and how bad the impaction is. Sometimes, the backup can resolve on its own as time goes on. Removal of the earwax impaction can also be an option, especially in children who don’t understand what’s going on and cannot answer questions about their condition.

You can also consider other treatments. They may include:

Do not ever attempt to remove your earwax with tweezers or other tools on your own. Your doctor is trained in the best way to care for your ears and hearing. If attempted on your own, your ear canal can be perforated or more, possibly causing permanent hearing loss.

Contact the specialists at Fairfax Hearing Center for answers to your ear care questions and information about your hearing and the services we can offer. We look forward to caring for you.